How to Set Up a High Performing Team

How to Set Up a High Performing Team

Every business should strive to build high performing teams. After all, if you’re not performing, then you’re not succeeding to the best of your potential.

There are many great high-performing team models that you can look at, and within these, there is often plenty of overlap. Managing and developing your team requires creativity. It means putting the springboards into position for your team to be able to take the leap themselves.

But what can you do as a business leader to make sure that you’re nurturing a winning team?

In this article, we’ll take a look at how to build a high performing team.

According to Bruce Tuckman (1965), there are four key stages in a group’s development. Forming, storming, norming, and performing.

All teams must go through phases where they get to know each other and get used to working with each other by testing out the rules of the group.

During the earlier stages of this process, a team will be at its least productive, however, as long as these stages are allowed to happen, they will begin to perform.

Of course, for a high performing team, you will need more in-depth team management techniques.

Learn to Nip Conflict in the Bud 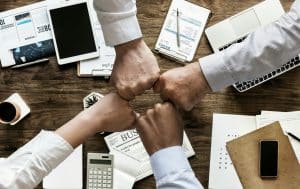 Not agreeing on everything is healthy and normal. If there was never any tension in a team, then there would be no creativity and no innovation. However, when conflicts arise out of disagreements, this can be somewhat counter-productive and unhealthy for your team.

As a team leader, it is your duty to notice the seeds of conflict forming and to do everything that you can to stop these things before a problem arises.

Your team wants to feel as though they are progressing. Make sure that you are giving them the opportunity and the tools to help them develop and grow in the way that they want.

Ultimately, if you have a more developed team member, they will become a greater asset. So, rather than micromanaging your team, encourage those within the team to develop their own leadership skills and allow them to lead for themselves.

Everyone in your team needs to know what they’re aiming towards. This means determining the overall mission of the group and breaking this down into SMART goals.

Having goals that are clear and measurable will ultimately allow the team to measure their success and adjust their efforts to meet these targets.

It is essential that you reward individual and team success. Celebrating achievements validates a team’s efforts and makes them feel wanted and appreciated. It will also further motivate them to achieve more.

How to Build a High Performing Team

To get the most of your high performing team, you need to bring in the right people. This means that great team-building begins with the recruitment process.

Centennial’s strength is attracting the best talent. Get in touch with us today to find out how we can help you to find and retain the very best leaders for your business.

The Right Fit for Our Future and Yours

What Is Employment Branding?

Category: Corporate Culture
We use cookies on our website to give you the most relevant experience by remembering your preferences and repeat visits. By clicking “Accept All”, you consent to the use of ALL the cookies. However, you may visit "Cookie Settings" to provide a controlled consent.
Cookie SettingsAccept All
Manage consent

This website uses cookies to improve your experience while you navigate through the website. Out of these, the cookies that are categorized as necessary are stored on your browser as they are essential for the working of basic functionalities of the website. We also use third-party cookies that help us analyze and understand how you use this website. These cookies will be stored in your browser only with your consent. You also have the option to opt-out of these cookies. But opting out of some of these cookies may affect your browsing experience.
Necessary Always Enabled
Necessary cookies are absolutely essential for the website to function properly. These cookies ensure basic functionalities and security features of the website, anonymously.
Functional
Functional cookies help to perform certain functionalities like sharing the content of the website on social media platforms, collect feedbacks, and other third-party features.
Performance
Performance cookies are used to understand and analyze the key performance indexes of the website which helps in delivering a better user experience for the visitors.
Analytics
Analytical cookies are used to understand how visitors interact with the website. These cookies help provide information on metrics the number of visitors, bounce rate, traffic source, etc.
Advertisement
Advertisement cookies are used to provide visitors with relevant ads and marketing campaigns. These cookies track visitors across websites and collect information to provide customized ads.
Others
Other uncategorized cookies are those that are being analyzed and have not been classified into a category as yet.
SAVE & ACCEPT